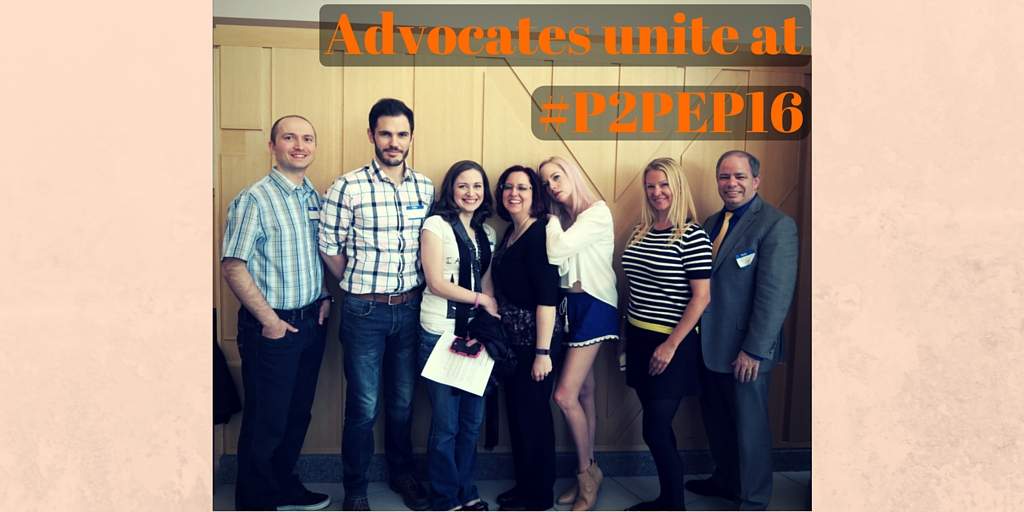 I had been invited to speak in Ann Arbor, Michigan, USA as part of a patient event called P2PEP (Patient 2 Patient Education Project) on Saturday, April 16, 2016.   The event was hosted by the University of Michigan IBD Team and was led by Dr. Peter Higgins.

Because this trip was only going to be overnight I decided to only pack a single backpack, which worked out quite well! The backpack I used is an HP laptop backpack (for larger, 17″ models), and it fit all my clothes, ostomy supplies, and electronics without many problems.  I wish I had a proper daypack, rather than this backpack, as I found that the padding and multitude of compartments added a lot of bulk that could have been better utilized.

The flight was a quick hour, and I landed in Detroit just before 5pm.  I was taken to my hotel by taxi and unpacked some of my stuff after checking out the room.

I met up with Amber from Colitis Ninja and Amber from About IBD, and we had dinner at the hotel.

These gals were so fun to be around, and we had a blast talking the night away!

I woke up early on Saturday and checked out of the hotel, but not before we had a fire alarm go off! For breakfast, we met Dr. Higgins, and we were also joined by Sara Ringer and Dan Sharp.  It was so amazing to see people who I chat with online pretty much daily, but have never met in person! Sara has been a hero of mine for years, and her advocacy work goes back many years before I started this site.

I wasn’t sure if I should eat anything for breakfast as I didn’t want my stoma to be too active throughout the day, but I decided on oatmeal with pecans and banana (and was glad that I did!).

We all headed to the Palmer Commons at the University of Michigan, where we would all be presenting that day.

The event featured several few presentations ranging from advocacy advice to future research, and it drew in over one hundred people with IBD.  Each presentation had around 8-12 people listening in, and since the presentations were interactive I found the smaller groups worked well.

I presented alongside Jane Theriault, who is a CWOCN (wound and ostomy nurse) for the session on living with an ostomy (we did this one twice).  Jane was so great to present with, and she brought along products for people to touch and feel as we answered questions.

My second presentation was on keeping hydrated when you’ve got IBD and/or an ostomy.  I was presenting with Emily Haller, a Registered Dietitian Nutritionist who works with IBD patients.  Emily, who also just happens to be vegan too, was so great to present with!

We were given the opportunity to see some of the other presenters during our downtime, and I saw Amber Tresca and Emly Haller give a talk on Food and IBD, as well as Dan Sharp, who gave a presentation on how to advocate for yourself or a loved one. Both presentations were well done and informative!

It’s a shame that my taxi ride back to the airport was scheduled soon after the event ended, but not before I had a chance to chat with my fellow advocates! Even IBD Nurse Kay from the UK was there to present!

I had such a blast at the event and wish I could have stayed longer to chat with people who I not only consider friends but also important advocates for people with IBD or an ostomy.

Special thanks to Anna Romans, Debbie Tanton, Kay Sauder, Jen Dixon, Kim Brunette, and Angie Theil, who I know put in a lot of effort to get this event organized! Thank you!

Links to the advocates mentioned:

Use one of the links below to help support this website every time you order through Amazon.

VeganOstomy is a participant in the Amazon Services LLC Associates Program, an affiliate advertising program designed to provide a means for this site to earn advertising fees by advertising and linking to Amazon.com, Amazon.ca, and Amazon.co.uk.While certain articles on this site may contain affiliate links, I do not accept paid reviews, sponsored posts, or paid advertisements on the site.
wpDiscuz