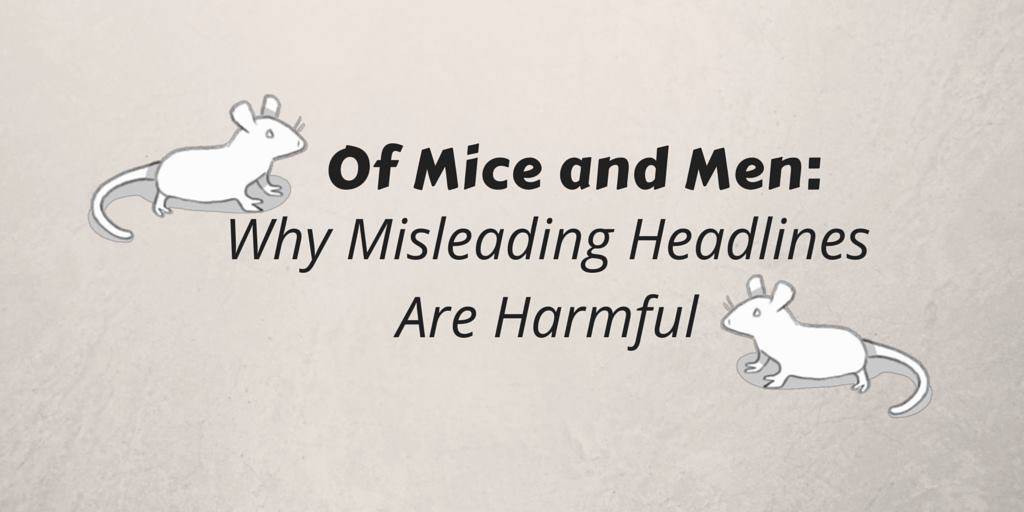 Did you know that a mothers kiss can give a child IBD? Yes, it’s true, because I read it in a headline and saw the photos as proof!  Unfortunately, what the headline and photo conveniently excluded was the fact that this might only apply to mice. Recent headlines about the causes and cures for Crohn’s Disease and Ulcerative Colitis have been making their rounds across social media again, and they often give a misleading representation of the data being looked at, especially when that data is coming from non-human animals.

It’s been long known that using non-human animals to study human-related illness or medication intended for humans is a wasteful use of resources which often leads to erroneous conclusions and a distortion of the facts.  Yes, feed a dog chocolate and they could die, but that doesn’t happen in humans.  The same can be said about much of the research conducted on non-human animals when we try to mirror it to humans.

Recently, a few headlines HERE and HERE (and their accompanying thumbnails) have been swirling around social media, and they’ve caused a lot of people with IBD to become anxious and confused:

See the problem?  Well, the fact that the study in question used MICE and not actual human mothers makes this kind of reporting a little dubious, but because many readers will focus on the thumbnail (especially when all they see is the photo and a headline on social media), they could come to the conclusion that human mothers give their kids IBD through breastfeeding, cuddling or kissing their child; I’ve even read mothers questioning whether they should continue breastfeeding their babies because of this article(!!). Even the headline “Inflammatory Bowel Disease Transmitted by Maternal Bacteria” is extremely misleading.

A big part of the problem is how these studies are being reported on.  Yeah, I get it: clickbait gets you more views, which generate more ad revenue – that’s fine, as long as your goal is to make money and not to present scientific findings.  But when someone with a chronic illness reads these headlines, a whirlwind of thoughts run through their mind:

“Could I give my child IBD if I breastfeed them?”

“Am I to blame for my illness?”

Even worse is that our family and friends will also read those sensationalist headlines and start blaming us for our illness:

“Well, if you stayed away from XYZ, then you wouldn’t be sick”

Responsible reporting should focus on facts and should CLEARLY state, in the headline, whether the study applies to humans or not.  Having to dig into the full text of a published paper (which, by the way, was NOT linked in either of those studies!) only to discover that mice, and not (wo)men, were used to test a theory leaves me both frustrated and upset that media outlets (in this case online science magazines) didn’t have the decency to point this out to the reader right from the start.

If you have a chronic illness, the best thing you can do for yourself is to avoid headlines or look at the research yourself. If there are no references to follow up on, consider the article an opinion piece.

QUESTION: Have you been mislead by headlines about IBD?

Guys, don’t you think that if someone is considering such an important decision as whether to breastfeed their child just because of some stupid headline on some random webpage, well it just means there’s something wrong with them…? I mean, c’mon! Talk to your doctor and don’t just trust everything you read if you can’t understand it…

Hey Sofia, one would hope so, but when the same (false) message is seen over and over, people begin to think it’s truth. It’s sad to see, but this would apply to just about everything you hear/read/see on the internet or TV.

Ultimately, if the media is being misleading, they need to be called out so that the public at least knows to stay away from certain places and only rely on reputable sources (who have been responsible enough to not use such horribly inaccurate headlines).

Thanks to you & others like you for continuing to be IBD warriors & for raising awareness. Since my son’s diagnosis of UC just over a year ago, we’ve learnt how family don’t have a clue, some are quick to judge, strangers love to give their opinion or even worse try to SELL you a ‘miracle cure’ for your illness. We are fortunate that our little family stick together & have formed a bond of solidarity & championing & advocacy for my son. But I know others arent so lucky & it can become a lonely & isolating & painful journey. So thanks again for your fighting spirit & for supporting others on their journey. Jo x

Your son is lucky to have you! Thank you for your kind words.

as always, spot on. i giggled. 10+ years of reading junk like those headlines it makes your head spin. thanks for always being informative, but making seasoned IBDers laugh with you.

=) Thanks Kelly. The headlines don’t phase me (I never take a headline at face value, just as I don’t take the front of packaged food at face value), but when I read about women questioning whether they should breastfeed or kiss their infant because of these types of headlines, it makes me wonder why there aren’t any strict laws against it – like a form of false advertising? Clickbait, especially in the context of health and wellness infuriates me. Many health reporters have no idea what it feels like to be in desperate need of a cure and then to read these misleading headlines.

Fortunately, other news outlets who picked up on the story weren’t as irresponsible as the two I mention in the article.

Use one of the links below to help support this website every time you order through Amazon.

VeganOstomy is a participant in the Amazon Services LLC Associates Program, an affiliate advertising program designed to provide a means for this site to earn advertising fees by advertising and linking to Amazon.com, Amazon.ca, and Amazon.co.uk. While certain articles on this site may contain affiliate links, I do not accept paid reviews, sponsored posts, or paid advertisements on the site.
Scroll back to top wpDiscuz